Famous Trees in the United Kingdom

by Sharon Howe May 12, 2019
Trees come in all shapes, sizes and varieties, and whilst we think all trees are beautiful, there are some that are famous, and have become visit attractions.
Some of the stories are amazing and full of history and folklore.

The Major Oak's hollow trunk was supposedly used as a hideout by Robin Hood’s merry men. Although tree dating has suggested this is not possible, as the tree would have been only a sapling when Robin Hood was around 800 years ago. Even so, a visit to Sherwood Forest would still be worth it. 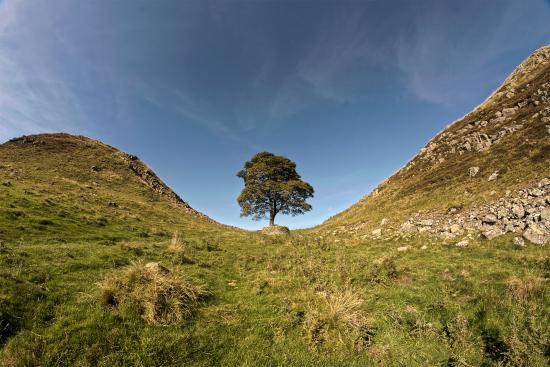 This photo of Sycamore Gap is courtesy of TripAdvisor

The Sycamore Gap grows on the border between England and Scotland, and grows in a dramatic dip alongside Hadrian's Wall in Northumberland.

It appeared in the 1991 film Robin Hood: Prince of Thieves, so it is known as the Robin Hood Tree.  The Sycamore Gap is one of the most photographed trees in the UK.  In 2016 it was crowned English Tree of the Year in the Woodland Trust awards.

The Queen Elizabeth Oak is situated in the grounds of Hatfield House in Hertfordshire.

This is the tree Elizabeth I was reportedly sat under when she heard the news of her sister Mary’s death.  This momentous occasion meant that she was freed from her imprisonment and now Queen of England.  It has been questioned as to whether this story is actual true, however as the tree is situated in the grounds of Hatfield House where Elizabeth stayed, it is more than likely she visited the tree.

The Trees of Dartmoor - Devon

There are so many areas worth visiting at Dartmoor.  Starting off with the old oak forests, such as Wistmans Wood.   Then there is Black-a-tor copse and Piles Copse, where the wild branches of the gnarled trees splay out in all directions.  Not forgetting the lone hawthorns contorted into shapes by the wind have become iconic images of Dartmoor. This 70ft beech tree has a terrifying face present in the side of it. With its bulging eyes, wide-open mouth and massive teeth, it looks as though the tree is screaming.  It is found in the grounds of Stowlangtoft Hall, which is a care home for the elderly.

Savernake Forest is privately owned, although open to the public and managed by the Forestry Commission. It is located between the historic town of Marlborough and Great Bedwyn.  The history of the forest goes back for a thousand years or more and was once a popular hunting area where royalty chased stags past trees that still stand today. Its long history means that there is an outstanding legacy of old trees and it has one of the countries oldest trees, the Big Bellied Oak.

Linley Beeches is an avenue of beech trees across the top of Linley Hill.  The aged beech trees that stand tall on Linley Hill in Shropshire are the jewels in an arboreal crown in the quiet Welsh Borders.

Ankerwycke Yew is the National Trust’s oldest tree and is a remarkable 2,500 years old.  According to popular belief, Henry VIII courted Anne Boleyn beneath its branches.

Kingley Vale has one of Europe,s most impressive yew forests.  The yews in the forest are as much as 2,000 years old.  Their survival is remarkable as most of the ancient yew trees were felled after the 14th century due to them being the preferred material for the staves of English Longbows.

Not only were they used for Longbows, the yews at Kingley Vale were also used for target practice by the British and Canadian troops, when they were rehearsing for the D-Day landings in 1944.

The yews should now be safe and are located in Kingley Vale Natural Nature Reserve in the South Downs.

An avenue of beautiful sweet chestnut trees that spread a full kilometre west of Croft Castle in Herefordshire. Legend has it that these nearly 300 veteran trees were grown from nuts that came from the wrecked Spanish Armada.

The Flower of Kent Tree - Lincolnshire

Sir Isaac Newton’s discovery of gravity is one of the most significant moments in scientific history, and this is the apple tree that made it all happen. Standing in the grounds of Woolsthrope Manor, the tree is now surrounded by a low willow barrier to protect it that was erected by the National Trust.

The most valuable tree in Britain has been identified as a £750,000 plane in the heart of Mayfair.  The tree, which has a 6ft wide trunk, is around 70 times more expensive than an average street tree. The size, health, historical significance and local’s enjoyment of the tree, was taken into consideration when assessing its value. Possibly the most imposing and impressive tree avenue in the UK, these rows of beeches were planted by the Stuart family in the 18th Century.  These trees have been used in many films and TV productions, including the Game of Thrones as they were used as a backdrop in the first series.

There are two old yews with twisting entwined branches near the ruins of Crom Castle in Northern Ireland. One of the trees is male, characterised by small yellow flowers whilst the other is female, with green flowers, which turn to red berries. It is thought that the trees were planted close together some time in the 17th century, and somehow grew knotted together.

The man-made Isle of Spar is best seen from the eastern shores of Loch Tay, not far from the pretty village of Kenmore. We have the early inhabitants of Scotland to thank for creating the crannog, a defensive island-based dwelling, today home to a spectacular collection of trees. It was rebuilt in 1842 prior to a visit by Queen Victoria, and the trees and walling on the island are believed to date from this period.

A tall silver birch waves her burnished gold leaves under a crown of Scots pine on a tiny loch island in Tayside. The colours are vivid, the strong reds of the beech trees tangling with the russet branches of the pine. And lower down, rowan, birch and lichen complete the picture-postcard scene.

The Armaddy Wishing Tree is a dead hawthorn lying within a wooden enclosure, beside a track leading from Armaddy Bay to Degnish Peninsula.  It is known as the ‘Wishing Tree’ because local custom says that inserting a coin into the trees bark will entitle the depositer to a wish.

We love the stories and legends behind these trees which are definitely on our must see list whilst we are out and about in these areas.

Do you have a favourite tree or know an amazing tree story? We'd love to hear about it. Send us a comment or message us and we will include it and credit you.